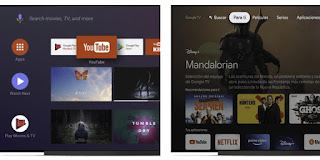 If you’re looking to upgrade your TV, there are two major TV streaming options available today – Google TV and Android TV. Both offer access to thousands of movies and TV shows through popular services like Netflix, Hulu, Pandora, and more, but how do these two work?

How do you choose the right one? And what can each do for you? We’ll answer all of that and more in this Google TV vs Android TV comparison guide!

What is Google Chromecast?

Chromecast, Google’s $35 TV dongle, allows you to stream content from your smartphone or tablet to your HDTV via a Wi-Fi connection. The device itself plugs into your TV’s HDMI port and connects to your home Wi-Fi network.

From there you can cast video or music from any Google Play app that allows it onto a big screen and be able to use your mobile device as a remote control.

In addition to Google Play content, Chromecast also works with Netflix and YouTube. If you’re an iOS user, you can stream content from your Apple device using a third-party Chrome browser app.

What is Android TV?

In case you didn’t know, Google TV was an initiative by Google to bring its services to televisions. However, it never really took off—likely because people didn’t like installing apps on their TVs—and in 2015, Google announced that it would no longer be supporting or developing apps for those devices.

That left a gaping hole in our living rooms. Thankfully, Google has found a new way to fill that void: Android TV. And although it bears similar functionality and functionality to Roku boxes and Amazon Firesticks, there are some distinct differences between these platforms; which one works best for you depends largely on your own needs.

Here are some things to consider when deciding whether Android TV or Roku is right for you. First and foremost, is it available where you live?: Currently, Android TV only has a handful of official apps in other regions.

Android TV also seems more firmly anchored in movies than its rivals; if that’s not a primary concern for you (and it isn’t for many), then that factor shouldn’t weigh too heavily on your decision-making process.

If it’s an important concern—if there are particular apps or titles that are must-haves for you—then perhaps wait until those app providers officially launch with support on Android TV before purchasing one of these streaming devices.

Understanding what you want from your home entertainment system

Your choice of a smart TV or a set-top box depends on what you’re looking to get out of your viewing experience. If you’re already fully invested in an ecosystem like Apple or Google, it makes sense to choose one of those platforms because they allow seamless integration with their content stores and other hardware.

However, if you’re not too married to any particular platform and are open to integrating other products as well (read: non-Apple/Android devices), there’s more freedom to shop around. After all, you can always add an Apple TV or Chromecast later if needed.

It’s important to keep in mind what you want from your system. Are you interested in 4K content? If so, do you have a TV that supports it yet or are you planning on buying one soon? Do you prefer using a controller like a gamepad over touch-based navigation and voice commands?

Choosing between AppleTV and Chromecast

AppleTV and Chromecast are both small digital media streamers that let you watch internet-based content on your TV.

However, they’re vastly different from one another in many ways. In order to know which of these devices is right for you, consider what services you want to use and how they integrate with your device.

The most basic difference between these two devices lies in their operating systems. AppleTV uses an operating system called tvOS and runs apps that are created specifically for it.

Chromecast uses an operating system called Chrome OS and runs apps that are compatible with it.

Both allow users to stream online media from a device to a television. Both are less expensive than most smart TVs. Both can be controlled with a smartphone or tablet. Chromecast and AppleTV both have their respective strengths and weaknesses, but there isn’t one that clearly outperforms or outshines another.

Below are some of those characteristics you should look into before making your decision between which streaming box fits you best:

Set-Up: Setting up either Chromecast or AppleTV only takes about 2 minutes.This includes plugging in power cords and setting them up using an app on your phone. Either option comes ready to connect to Wi-Fi so it can easily connect with any other compatible devices in your home like a gaming console, Blu-ray player, etc.

Compatibility: As mentioned previously each streaming box can work wirelessly and works similarly when it comes to connecting other devices via Wi-Fi—the main difference is that Chromecast does not need external apps on other devices whereas Apple TV does…unless you don’t mind flinging content from your iOS/Android device without HDMI mirroring capability.

Each has its own wide range of compatible applications including Netflix, Hulu Plus, Amazon Instant Video, and YouTube.

AppleTV and Chromecast have recently become household names. People are often confused about what it actually does and even more, people aren’t sure which device they should be buying.

In this review, we will help you understand exactly what AppleTV and Chromecast do and how they can benefit your home media experience. Here are some of their main differences that may be helpful when making a decision about which one to get:Two Key Differences Between Google TV & Amazon Fire TV Devices: What’s great about these devices is that both interfaces have been refined so well that it is effortless to access your favorite apps with a simple push of a button.

How Do You Watch Video On AppleTV/Chromecast (i.e., Apps)

While many of us are used to doing things like channel surfing with a typical cable box and DVR setup, streaming content providers like Netflix or Hulu offer a very different model for watching the video.

Apple has its own spin on things with AppleTV and Chromecast—which essentially serve as hardware adaptors that make it easy to stream content from your mobile device to your television screen.

The difference between Google’s Chromecast and Apple’s competing devices boils down to two main factors: cost (the $35 price tag makes it much more accessible) and functionality (i.e., an app store that lets you watch live TV).