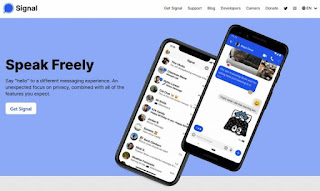 Signal is a secure, free, and open source messaging application that uses end-to-end encryption to securely send and receive all kinds of communications with other Signal users. Using the Internet for all encrypted communication, Signal comes highly recommended by some of the top privacy and security advocates.

In this Signal review, we’ll look at the capabilities, usability, and security that Signal offers. We’ll also talk about how the design of the service provides extremely strong protection for your privacy. Signal is truly impressive, so let’s cut the chatter and dig in to the review.

Here are some key features to consider when deciding whether the Signal app is right for you:

Where is your Signal data stored?

When you use Signal, your data is stored in encrypted form on your devices. The only information that is stored on the Signal servers for each account is the phone number you registered with, the date and time you joined the service, and the date you last logged on. As Signal points out,

Notably, things we don’t have stored include anything about a user’s contacts (such as the contacts themselves, a hash of the contacts, any other derivative contact information), anything about a user’s groups (such as how many groups a user is in, which groups a user is in, the membership lists of a user’s groups), or any records of who a user has been communicating with.

All message contents are end-to-end encrypted, so we don’t have that information either.

This is great for your privacy, since no one can get any more information than that without physical access to your device or those of the people you communicate with.

Note: This is different from Wire messenger, which stores info about your contacts on central servers.

Third-party testing and audits of Signal

Even when a product is 100% open source like Signal, you don’t really know how good it is until someone checks it out. Here are some published findings by experts you can review to see how good Signal really is.

A formal security analysis of the Signal protocol was conducted in 2016. According to that analysis, conducted by researchers from Germany, Switzerland, the United States, and Canada, there were no major flaws in the design. It showed that the protocol was cryptographically sound. The analysis has been updated several times since, without changing the researcher’s conclusion that the protocol is sound. The last update was published in July, 2019.

Note: In September, 2019, a bug in the user interface of the Android version of the Signal app was discovered that could have allowed an attacker to eavesdrop on Signal users. According to Vice.com, the bug was fixed the same day it was reported. This incident shows both the responsiveness of the Signal team, and the importance of keeping your copy of the Signal app and desktop updated.

For purposes of this Signal review, I tested out the mobile app for Android, along with the Linux desktop app.

Note: Signal is different than many other secure messaging apps in that you need to install and register it on a mobile phone before you can use it anywhere else. Therefore, I’ll address the mobile (Android) app first.

Installing Signal on an Android phone

Installing Signal on an Android phone involves downloading the app from Google Play and registering your phone using your telephone number. While some people object to registering using a phone number instead of an email address or anonymous username, doing it this way lets Signal connect easily to your phone’s contact list. Another benefit to this approach is that it lets Signal replace your phone’s built-in messaging app on Android devices.

Note: You can download an Android Signal APK here, and install the app that way, but Signal recommends against it unless you are an advanced user with special needs that would justify doing so.

Once you finish installing and registering your account, the Signal app will use your Internet connection to securely communicate with other Signal users by text, voice, video, group messaging, even file sharing, all using the secure Signal protocol.

Note: If you replace Android’s messaging app with Signal, you will need to distinguish between Signal users and non-users before sending messages. That’s because Signal cannot send encrypted SMS or MMS messages, meaning messages to non-Signal users will not be secure. The app does, however, notify you whenever you are messaging someone with a Signal account, and will offer you an easy way to invite non-users to join Signal when you connect to them.

When you open Signal app you’ll see a list of your current phone contacts who are Signal users. The interface itself is clean and includes a wealth of information about the status of your contacts and your communications with them: 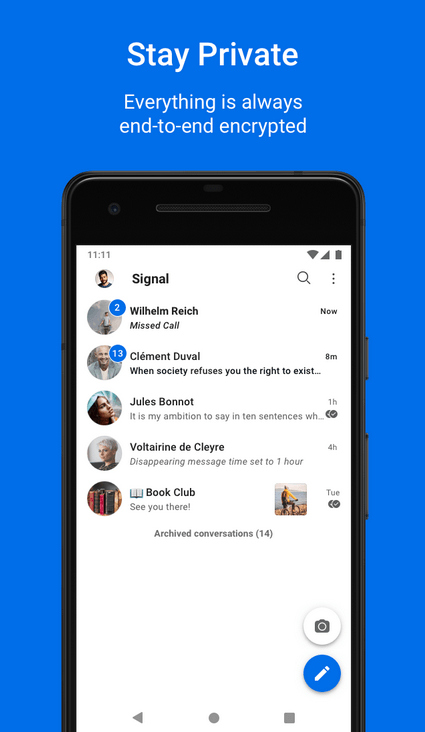 Tap the listing for a particular contact to open it. You’ll see the full thread of your conversation with that contact, the same as you would with any other messaging app.

But Signal has a number of features that can enhance your privacy, adjust the user interface, or just have fun adding things like animated stickers. Here are some of those features:

Because your phone number is the only way Signal can identify you, you need to link your account to Signal Desktop. Launching Signal Desktop for the first time displays a QR code you can use to make the connection It will look something like this: 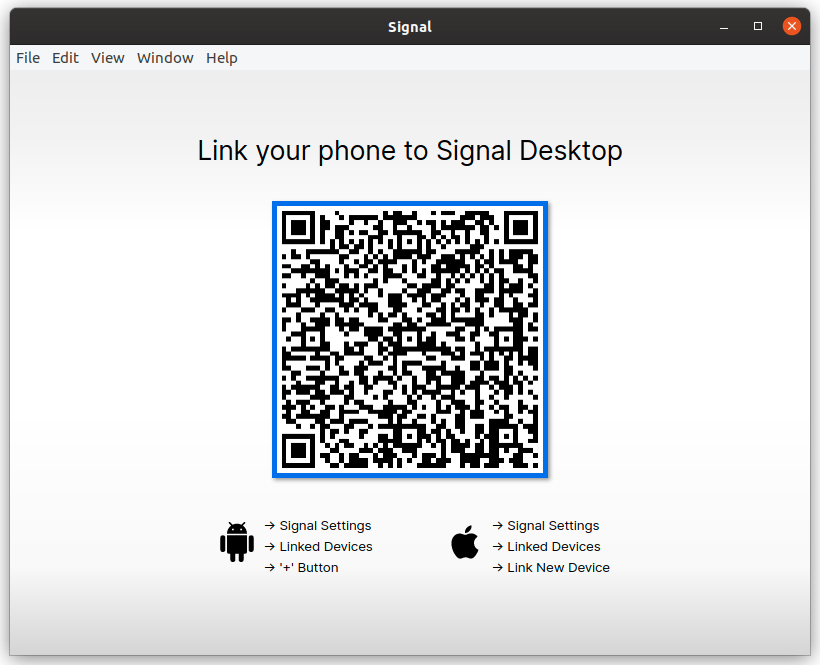 Follow the directions on the bottom of this window to connect Signal Desktop to your mobile device and sync your data between the two.

Once the desktop is synched to your mobile phone, you’ll see that clean Signal interface along with your contacts. 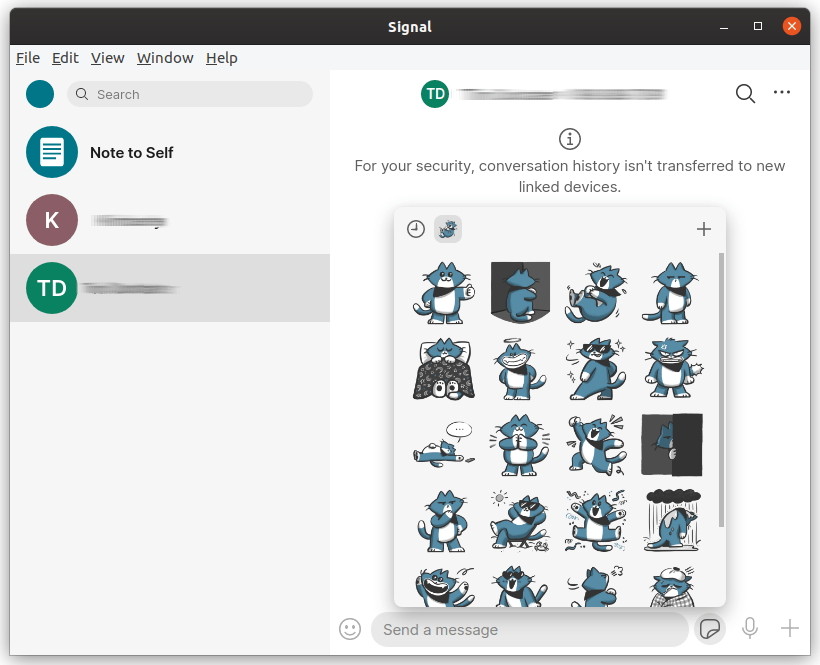 I’ll leave it up to you to explore what else the Signal Desktop can do besides displaying those fun stickers!

Signal Support is a searchable collection of around 70 articles addressing the most common questions and topics a Signal user might want information on. 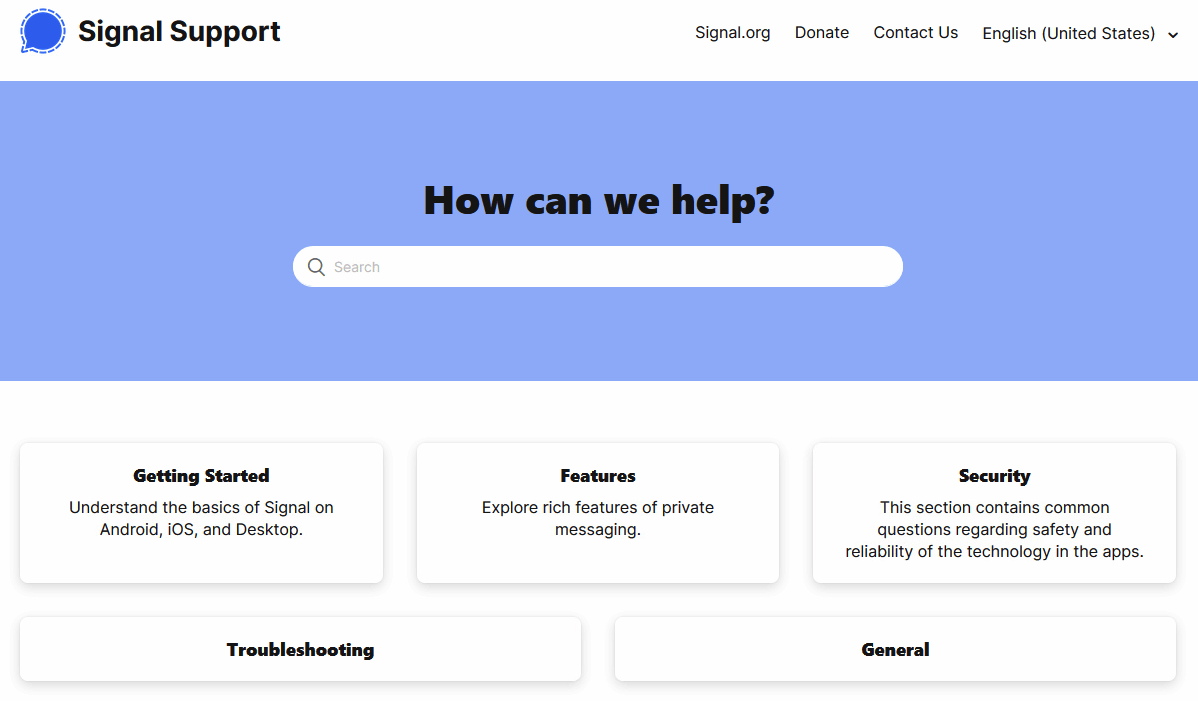 For cases where this isn’t enough, you can hit the Contact Us link at the top of the page to submit a help ticket.

How secure and private is Signal

When it comes to security, the Signal messaging protocol is generally considered to be the most secure messaging protocol available. It is so good that many other messaging products, including Facebook Messenger, Skype, and WhatsApp, claim to have adopted the protocol for use in their own products.

When it comes to privacy, Signal is also a winner. As we discussed earlier, Signal only records three bits of information about their users. This is far less information than other services collect. And you can take the privacy protections even one step further. This article has detailed instructions for registering a Signal account without disclosing your personal phone number.

Signal has published one transparency report. The report, from October 2016, is incredibly detailed, even including transcripts of the subpoena used, and all the additional communication that passed back and forth.

Unlike other messaging services, such as Wire, Signal offers only a single, free version. There are no pricing tiers, no extra-cost features, and no business-specific features. This is consistent with the idea behind the product, which is to become the most secure messaging app available. Nothing more, nothing less.

The Signal pricing model is about as complicated as the list of Signal business features. The price for everything they publish is zero.

Everything is free and open source software.

While you can use everything from Signal free of charge, the Signal Technology Foundation is an independent 501c3 nonprofit. They are committed to developing open source privacy technology that is desperately needed in this world of endless surveillance. You can make a contribution to the organization by visiting this page, and following the directions you find there.

Signal is clearly one of the leading secure messaging apps available today. While some people dislike the requirement to register with a phone number, the design of the whole system is such that it is hard to see this as a major problem. I have no qualms about recommending Signal to anyone investigating encrypted messaging services for personal use.

But you don’t need to take my advice on this. Users are flooding into the Signal camp from all directions. According to this February 2020 article at The Verge, The European Union has told its staff to switch to Signal for all its public instant messaging.

And let’s not forget these endorsements from big-name privacy and security advocates:

What else is there to say?

Is Signal right for you?

It is hard for me to imagine someone reading this post for whom Signal would not be the right secure messaging app. And remember: If the need to register with a phone number really bothers you, read this article for alternatives to giving Signal your personal phone number.

One other reason not to try Signal: if most of the people you need secure messaging for are already using another secure messaging service like Wire or Telegram, it might make sense to join them there instead of trying to get them to all move to Signal.

Beyond those cases, I believe that anyone looking for a secure messaging service should try Signal now.

How to Activate Airtel 500MB for N25 SmartTrybe Night Plan

How to Borrow Airtime from 9mobile, MTN, Glo & Airtel