Skip to content
October 5, 2022
Bet Talk / Sportbet
Here i am going to show you step by step on How to Predict football Soccer Correctly and Win.

First Of All i want you to understand that this is football and anything can happen. But with this step i am going to show you you are grantee to win big if you are not greedy.

I am going to make my text short while i go straight to the point without much analysis.
Now Lets Go.
*. Set Aside the money which you want to bet with, It is always better to start betting with reasonable money than to start betting with peanut expecting to win big from it.. I don’t say it is not possible to win big money with small amount of money but the risk is so how and you many loose your peanut over and over again without making a dime.

Click the Standing Option to Open the Table As Shown Below 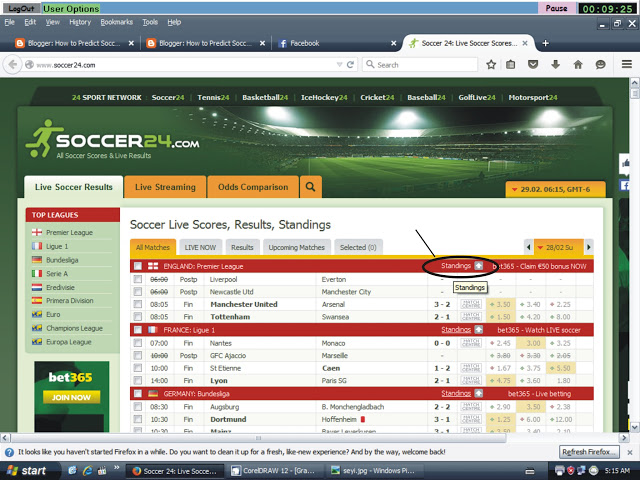 Now that you have gotten to this table, this is where the work begins..

Before we check the current form.. i want you to understand that some team are good in both HOME and AWAY match while some are only good at HOME alone and Vice Versa.

Here is their current form all team Now Lets check their Home and Away Form As you can see here that Manchester City, Tottenham and Leicester Are the Top 3in Home Form While Aston Villa , Bournemouth and Crystal Palace is at the Bottom AS you can see Sunderland , Newcastle Utd and Aston Villa Are the worst team when it comes to home and away .. While Leicester, Tottenham and Arsenal are Reliable but not 100%

Let go to their Next Match to predict.
NOTE: IF WANT TO PICK GAME .. PLEASE DON’T NOT PICK MORE THAN 1-4 FROM THE TABLE E.G LEICESTER , ARSENAL , TOTTENHAM AND MANCHESTER CITY MAKE SURE YOU CHECK THEIR FORM BOTH HOME AND AWAY BEFORE YOU PICK THEM AND BE SURE THEY DO NOT HAVE MUCH INJURY PLAYER
NOW LETS GO AS YOU CAN SEE FROM THE TABLE THAT LEICESTER IS PLAYING AT HOME WHILE WESTBROM IS THE GUEST TEAM HERE … ACCORDING TO WHAT I HIGHLIGHTED THEIR.. BOTH TEAM HAS ONLY LOST 1 MATCH BUT LEICESTER WON 4 WHILE WESTBROM WON 2 DRAW 2 AND LOST 1..
THE NEXT THING TO DO NOW IS TO CHECK THEIR HEAD TO HEAD .. NOW AS YOU CAN SEE FROM THEIR HEAD TO HEAD THAT LEICESTER HAS DEFEATED WESTBROM FROM ITS HOME SINCE 2007 BUT WESTBROM HAS BEEN TAKING CARE OF LEICESTER UP TILL DATE BUT LICESTER CURRENT FORM DOESN’T GUARANTEE WESTBROM VICTORY .. WHICH MEAN THE GAME IS RISKY AND ANYBODY CAN WIN OR OVER 1.5 OPTION IS GOOD FOR THIS GAME.

How to protect your bank account from being hacked

How to Deposit Into Your Bet9ja Online Account With Your ATM