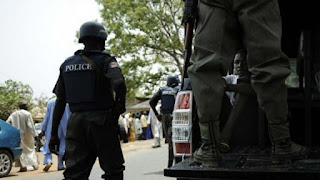 Three policemen have been remanded in prison custody for allegedly stealing two AK 47 rifles worth N1.7m belonging to the Nigeria Police Force.

They were earlier dismissed after facing orderly room trial.
The policemen are Uzor Emmanuel aged 34, Akharamen Michael aged 31 and Jimoh Halilu aged 27.
They were attached to “Operation Wabaizigan”
It was gathered that the two fully-loaded AK-47 rifles assigned to Micheal and Jimoh were allegedly stolen from Uzor at Obodo Guest House, Uwasota Road, Ugbowo, Benin City on July 17, 2019..
Sergeant Uzor had gone to the guest house with a lady friend after he closed from duty but discovered the rifles were stolen at about 2am.
The policemen were arraigned on three count charges of conspiracy and stealing.
Prosecution Counsel, SP. Peter Ugbumba, said the trio did steal two AK 47 rifles with Breach No’s, 11479 with twenty-five rounds of live ammunition and Breach No, 05766 with nine rounds of live ammunition valued one million seventy-seven thousands Naira (1, 770, 000.00), property of the Nigeria Police Force, Edo State Police Command.
Ugbumba said the defendants, with intent to felonious and heinous crimes to wit armed robbery, kidnapping, murder etc, did intentionally, knowingly and unlawfully kept in their possession and control the two AK 47 rifles with the live ammunition.
He said offences were punishable under Section 390 (6) (9) of the Criminal Code Act Cap c38 Vol. 4, and Section 3 (1) of the Robbery and Firearms (Special Provision) Act Cap R11 Laws of the Federation of Nigeria 2004, respectively.