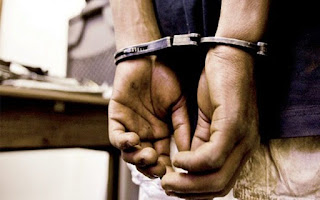 The incident happened at Jakande Estate, Ejigbo area of Lagos, where Ikpe ran a school and the victim was his student.
The suspect, Ikpe, was said to have got married last December and was yet to have a child before he impregnated the victim. He then attempted to abort the pregnancy but there were complications. The victim was said to have lost blood for several weeks before she informed her parents about what happened.
It was gathered that the victim had registered for JAMB tutorials in Ikpe’s school; she passed and was asked to go to Ekiti State to write Post JAMB exams for admission into the university. The parents of the victim trusted the suspect, Ikpe and gave him some money to take the victim to the school for the Post JAMB exams at Ekiti State University.
The suspect took her to the school and after writing the exams, they lodged in a hotel where he engaged her in sex romp and got her pregnant.
When they returned to Lagos, the victim did not see her menses and informed Ikpe. They conducted a pregnancy test and the result was positive. He reportedly took her to an undisclosed hospital for abortion in order to terminate the pregnancy so that Ikpe’s wife will not know and the victim will continue her education as well.
However, there were complications and she bled profusely, which made her to inform her parents about what happened.
The matter was reported to the Police at Ejigbo Division; Ikpe was arrested and detained at the Police Station for investigation.
The victim was taken to Mirabel Center in order to secure her life and eventually the foetus was said to be intact despite the bleeding.
It was gathered that the parents of the victim were in dilemma on what to do since the pregnancy was still intact and the victim may likely be delivered of the baby for her teacher, Ikpe.
When speaking with the Ejigbo Police Division DPO over the matter, she was said to have gone out for routine checks within the areas under her jurisdiction.
However, a source at the Police Station confirmed the incident and informed our reporter that the matter has been transferred to the Family Support Unit at Zone D Mushin for further investigation.
At the FSU in Mushin, where Ikpe is undergoing interrogation, he denied raping the victim and stated that he slept with her with her consent.
However, a Police source said he will be charged to Court for defilement because the victim was still a minor.