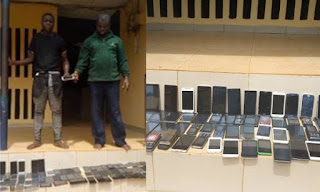 The Anambra State Police Command in Delta State have announced that it has arrested 2 car snatchers and have recovered over 150 phone from them.

The suspects identified as Anyingor Arinze of Otueke, Asaba Delta State; Chinedu Nweke of Mbekwe Estate, Ogidi and Ebuka Christian Eziamaka of Ire village, Obosi, both of Idemili North LGA of Anambra State are reportedly members of a gang involved in series of armed robbery/carjacking in Anambra and Asaba axis.
The phones recovered from the car snatchers after their arrest by operatives of Puff Adder in collaboration with police detectives attached to Aguata Division of the command, is suspected to have been stolen from their different victims.
Anambra State police command Police spokesperson, Haruna Mohammed confirmed the arrest of the suspects and other items he announced were recovered by security operatives include a Toyota Corolla and a Lexus 300 SUV.
He said,

YOUR OPINION!! Do You Think Atiku Would Be A Better President Than Buhari?