Manchester City have avoided a transfer ban after being fined £315,000 by FIFA for breaches relating to international transfers and registration of players under the age of 18. 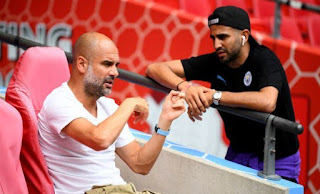 Chelsea were handed a one-year transfer ban and fined more than £460,000 in February after being found guilty of breaching rules about signing minors by FIFA.

FIFA officials have clarified why City were fined for breaching the same article as Chelsea, who were banned, with the world football’s governing body revealing City’s admission of responsibility was a factor in determining their punishment.
“In its decision on Manchester City, FIFA’s Disciplinary Committee took into consideration all specific circumstances of the case as well as the club’s cooperation in clarifying the relevant facts,” a FIFA spokesperson told Sky Sports News.
“It is important to stress that the specific circumstances of this case differ from previous cases involving breaches relating to the international transfer and registration of players under the age of 18.”
City said the breaches arose after a “misinterpretation of the regulations in question”, adding in a statement that they have been fully compliant since December 2016.
City, who are still currently under investigations from FIFA and UEFA with regards to financial fair play, were found to have breached article 19 of the FIFA Regulations on the Status and Transfer of Players.
FIFA’s statement added: “The protection of minors is a key element in FIFA’s overall regulatory framework relating to the transfer of players, and the effective enforcement of these rules is paramount, as has also been confirmed on various occasions by the Court of Arbitration for Sport.”

Tyson Fury confirms Dillian Whyte will be his British challenger next, blasts Anthony Joshua for rejecting a step-aside fight deal worth £67million

Lampard Proud Of Chelsea Despite Super Cup Defeat To Liverpool

Iwobi: How I Was Convinced To Join Everton