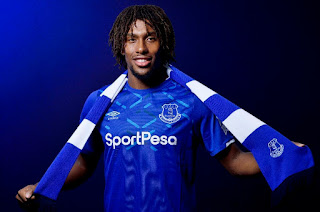 New Everton signing Alex Iwobi has opened up on how a conversation with The Tofees’ manager, Marco Silva, and director of football Marcel Brands convinced him to join the club, Completesports.com reports.

Iwobi joined the Merseyside club on summer transfer deadline day from Arsenal, signing a five-year deal at Goodison Park.
The Nigeria forward came through the youth ranks at the Gunners, before going on to make 149 appearances for the club’s senior side.

And Iwobi, speaking to evertontv on Tuesday evening, has revealed the offer the Blues made him was just too good to turn down.
“I spoke to the manager and Marcel and they almost lured me in,” Iwobi said.
“The offer was too attractive for me to turn down.
“The manager was telling me, ‘There is a spot for you, we will take care of you’. Basically, all the things you want to hear as a player.
“I always had that youngster tag at Arsenal, so hopefully with this move I am able to make a name for myself in the Premier League and create history with Everton.”
Iwobi was Everton’s seventh and final summer recruit, and the 23-year-old is relishing the prospect of working and improving under Blues boss, Silva.
Iwobo added: “It is exciting times for Everton. I was able to look at the transfers and players they have brought in – some great talent.
“It is not just me. There were quality players here before [the summer] and they are still here.
“The manager has worked with Richarlison for a long while and made a name for him.
“Hopefully, he can do the same for not just me but Moise Kean and a few others who came in, too.”
source : https://www.completesports.com/

BREAKING! See Why Pogba Could Still Move To Real Madrid

Rashford Is Now The Permanent Penalty Taker For Manchester United